Microblading vs Powder Brows vs Combination Brows vs Ombre Brows 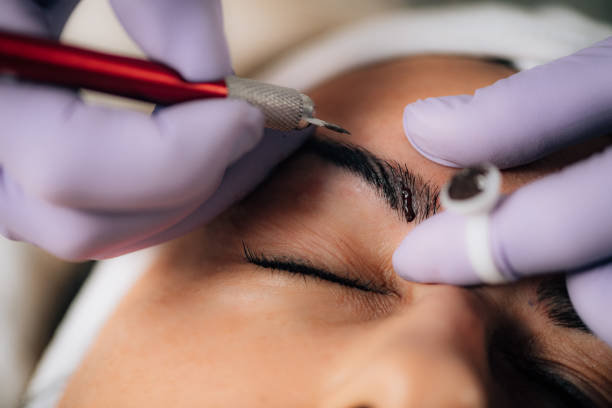 When it comes to semi-permanent eyebrows, you would have probably heard the name of microblading. With the fast-paced growth of social media in the last few years, the popularity of microblading in the US quickly surged, quickly replacing its predecessor. Basically, it is a type of architecture of eyebrow.

Microblading has seen mainstream appeal and market hype due to its hyper-realistic effect created by hair-like strokes cut into the skin. Micro blading is not on the deep layer of skin but more on the surface. The needle intricately implants light strokes with a medical-grade pigment on the epidermis layer of the skin. This creates fine, realistic, and natural hair strokes.  Each stroke looks like original hair (If done by a seasoned professional).

It is placed with a tool that has 12 tiny pins on it that resembles a razor blade. Little tiny paper cuts are created with pigment deposited in each one. However, it doesn’t hurt because you are numbed 20 minutes before the procedure begins.

Microblading is dry healing – you cannot sweat/exercise or get them wet while healing. Furthermore, for fast healing of the skin, a light ointment is applied daily.

Powder Brows differs from traditional tattooing in that it is surface work. In other words, this means that the application is done on the epidermis layer of the skin.   As the name suggests, the result resembles the look of makeup and is powdery. An attractive shape is given to it with a faded front and a crisp tail.

Within the last 3-4 years, powder brows have started to gain US attention, People with prior microblading work are frequently converting to

It is considered to be the best method as this combines the goodness of both the above-discussed methods.

This technique combines both hair-like strokes as in Microblading and shading into one blended result. This makes the brow look more filled as compared to what can be achieved by microblading solely.

In the front of the brow, hair strokes are placed, and in the arch and tail of the brow, shading is done to achieve a seamless brow with a lot more coverage.

The right combination of powder fill and micro-stroked hair strokes give an incredibly natural-looking eyebrow. This looks more defined as

well as filled in.

Ombre Brows is also a semi-permanent eyebrow styling technique that gives a light to dark Ombre effect, lighter at the bulb (front) of the eyebrow and going darker towards the tail.

How Much Do Microblading, Combination Brows & Ombre Brows Cost at Precision Cosmetics?

At Precision Cosmetics, the pricing is as follows:

Click here to book your appointment with one of our talented PMU artists at Precision Cosmetics today.